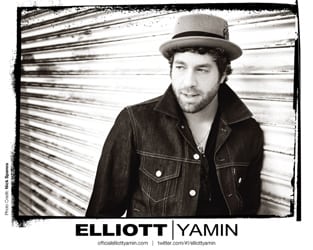 ADW Diabetes recently had the opportunity to talk to American Idol alumni and recording artist Elliott Yamin. Yamin is in preparing for the release of his third studio album titled “Let’s Get To What’s Real” on April 10th and a tour that will begin shortly afterwards.

Yamin was diagnosed with diabetes at the age of sixteen and while going through the American Idol process was open and honest about his diabetes with the world. A fan-favorite, whose soulful voice earned him a third place finish, has used his fame to bring diabetes awareness to the fore-front. He is not shy about talking about his diabetes, and he hopes that his honesty can positively impact anyone else that is or has struggled with their diabetes management.

“Diabetes has changed the course of my life for the better,” says Elliott Yamin. “I feel very fortunate to be in the position that I am in to be able to raise awareness, if nothing else, about diabetes and our plight. If I can help just one other person with diabetes that may be struggling by sharing my story than it is worth it. I embrace that.”

“We admire Elliott for sharing his story and his determination to not allow diabetes to slow him down while pursuing his dreams of making music,” said Chris Maguire, Vice President and Co-Founder of ADW Diabetes. “His dedication to help others with diabetes is worthy of a standing ovation.”

ADW Diabetes has published Elliott Yamin’s diabetes interview and his story of living with diabetes as a busy recording artist and his commitment to help others who have diabetes.

About ADW Diabetes: ADW Diabetes is a mail order company that is dedicated to keeping diabetes management affordable. ADW is focused on helping customers effectively manage their disease by providing one of the largest selections of diabetes-related products, including insulin pump supplies and glucose testing products at significant discounts. ADW takes a leading role in diabetes education through Destination Diabetes, an informational website featuring tips and advice from experienced healthcare professionals. ADW is involved in and supports the diabetes community and organizations that further diabetes education and research.

About Elliott Yamin: Yamin has already earned a prestigious reputation as both a world-class recording artist and a deeply compelling live performer, having built an impressive body of work as well as an intensely loyal international fan base. On Let’s Get to What’s Real, the multi-talented artist raises the musical and personal stakes, tapping into the emotional honesty and sonic intimacy of classic soul to create the most inspired and distinctive music he’s ever made. The resulting album is the purest expression to date of the musical talent and personal charisma that were first introduced to the public during Yamin’s stint as one of the most acclaimed performers to ever compete on TV’s American Idol.