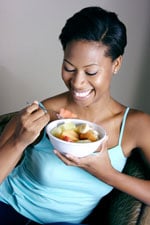 Many people have opted for a low-carb diet. But perhaps what they should be looking for is “slow carb” diet instead.

What are Slow Carbs?

Slow carbs are carbohydrates that digest slowly. They keep people feeling full for a longer time period and also release energy to the bloodstream in a more steady flow. This type of slow carb diet is also called a low-glycemic-load diet or a low-glycemic-index diet. For people with diabetes, a low-glycemic regimen may be just what the doctor ordered.

What is the Glycemic Index?

In brief, the glycemic index assigns a number to all foods. The number tells how quickly the food is converted to energy in your blood stream. The higher the number, the more quickly the food’s sugar floods your body (high-glycemic foods). The lower the number, the longer it takes for the food to convert to blood sugar (low-glycemic foods). The glycemic load of a food is calculated according to how large a portion of the food is consumed. A food may have a low-glycemic index in small portions, but in large portions, the glycemic load may be greater than desired.

The Low-Glycemic Diet and Diabetes

Eating foods that are low on the glycemic index can greatly benefit people with diabetes. A typical low-glycemic diet includes fruits and vegetables, healthy oils, nuts, beans, fish, lean meats, reduced-dairy products, and whole-grain foods. Foods to be avoided in general include refined grains, white potatoes, sweets, rice, and other foods that are quickly converted into blood glucose.

Foods with a low-glycemic index have been shown to help control type 2 diabetes, hypertension, and improve weight loss. In one study from Children’s Hospital in Boston, patients following a low-glycemic regimen had a reduced risk of heart disease. In the Insulin Resistance Atherosclerosis Study, scientists found that eating low-glycemic whole grains instead of refined grains can improve insulin sensitivity.

Research on the effects of a low-glycemic diet is still underway. However, it seems clear that eating low-glycemic foods is a smart choice not just for people with diabetes, but for everyone. For further information about the glycemic index and a low-glycemic diet, speak to your health care professional.