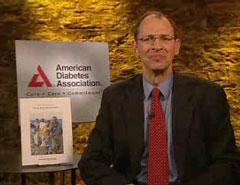 We had the privilege of talking with Dr. Richard Bergenstal, the Vice President of Medicine & Science of the American Diabetes Association (ADA; www.diabetes.org). Dr. Bergenstal has dedicated 30 years of his career to making life better for people with diabetes.

For privacy reasons YouTube needs your permission to be loaded. For more details, please see our About ADW Diabetes.
I Accept

The ADA is recommending men be more proactive in managing their diabetes including: “monitoring the ABCs of diabetes which include A1c (a measure of blood glucose), blood pressure and cholesterol.”

Listen to Dr. Richard Bergenstal’s interview for his viewpoint regarding how men with diabetes can be proactive in managing their diabetes to improve their overall health and quality of life.

The ADA has information on its website dedicated to men’s health issues. For more information and to download a free copy of the ADA’s booklet “Modern Man’s Guide to Living Well With Diabetes,” please visit http://www.diabetes.org/living-with-diabetes/treatment-and-care/men/.