The answer to whether coffee and diabetes is good or bad is … maybe. For many years now, conflicting studies have been published that alternately tout coffee for its beneficial properties, then condemn it as the scourge of healthy people everywhere. What’s a coffee lover to do?

Coffee is a popular beverage in the United States, as evidenced by the number of people holding a cup in the morning as they rush to work. The average adult in the U.S. sips about two 8-ounce cups a day. This is a total of 474 milliliters with 280 milligrams of caffeine. For healthy adults, consumption of up to 400 milligrams daily does not seem to noticeably affect blood sugar. But the results are different for people with diabetes.

A study published in Diabetologia in 2014 created buzz about the health benefits of coffee for diabetes. The study indicated coffee could possibly prevent diabetes. Harvard researchers discovered people who increased their intake more than one cup daily had an 11 percent lower risk of getting type 2 diabetes. Those who reduced their consumption by one cup had a 17 percent increased risk of developing diabetes. However, it is also debated whether ingredients in coffee other than caffeine could be responsible for the impact on developing diabetes.

Ongoing studies about coffee reveal it does have some health benefits. It may protect people against gallstones, liver disease, cancer, Parkinson’s disease, and gout as well as help prevent type 2 diabetes. Studies have shown that it can minimize the risk for depression and may help improve focus and clarity.

The Good, Bad and Ugly Aspects of a Cup of Joe 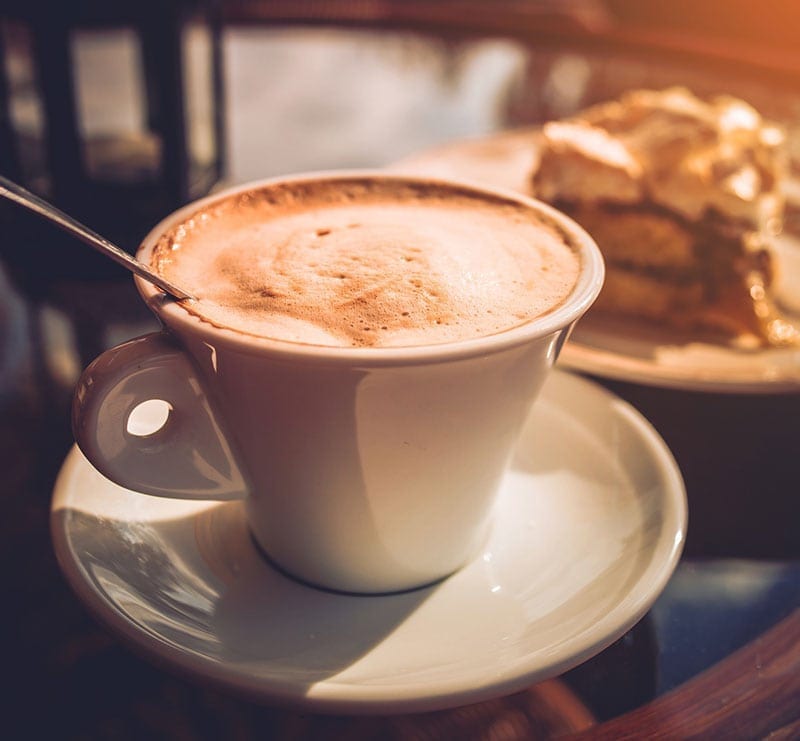 While coffee enthusiasts prefer to focus on the benefits, there are also general risks associated with drinking caffeinated. Side effects may include restlessness, increased heart rate, increased blood pressure, insomnia, anxiety and headaches. Children and teens should not consume more than 100 milligrams of caffeine daily. Remember, cola and energy drinks contain caffeine. Some people experience heartburn or reflux after consuming it.

A cup of black or black, decaffeinated coffee can be beneficial – or at least, not harmful. But the protective effects can be outweighed by what people add to it. Sugar sweeteners and artificial sweeteners can eliminate the potential benefits but adding sugar can cause blood sugar levels to rise in people with diabetes. Many sweet coffees also contain rich, flavored creamers that contain sugar, fat, and carbohydrates. This boosts the risks associated with diabetes and can cause people to pack on extra pounds. For those who feel a need to visit the local coffee shop, try “skinny” drinks or drink it black.

Some studies focus on caffeine rather than coffee as a whole. One such study shows that the consumption of caffeine significantly reduces insulin sensitivity. In layman’s terms, when you consume caffeine, the insulin in your bloodstream cannot process glucose as efficiently – an obvious problem for diabetics.

A study from Duke University seems to support this finding and further suggests that drinking caffeinated beverages with meals may make the problem even worse. If a diabetic has a meal (increasing the glucose to the blood) and at the same time consumes a cup of coffee (lowering the ability of the body to metabolize the increased glucose), the potential for dangerous blood sugar levels increases. Dr. James Lane, the leader of the study, advises that diabetics should probably avoid caffeine.

Decaffeinated coffee, on the other hand, may have much greater benefits for potential diabetics. A study from the University of Minnesota found that women who drank decaffeinated significantly reduced their risk of developing diabetes in comparison to women who drank caffeinated coffee.
At this time, it is unclear what component(s) may be providing these benefits, nor is it clear whether the same benefits are experienced by people who have already developed diabetes.

There is no Substitute for Positive Lifestyle Changes

Coffee lovers would like to have their favorite beverage revered, and some would like an excuse to drink this popular beverage. Others might be looking for an easy way to lower their blood sugar levels. Either way, there is no substitute for positive lifestyle changes. A balanced diet, daily exercise, and uninterrupted sleep are all simple ways to keep your blood sugar levels controlled. Always take insulin and medications as prescribed. Talk to your doctor regularly about your diabetes management plan and treatment option updates to stay on track.

The jury’s still out on how coffee affects people with diabetes and those who may develop diabetes. Until more conclusive evidence is offered as to the efficacy of coffee in improving your health moderation is probably the wisest course. And next time you reach for a cup of java, you might want to make it a decaf!

If you’d like to know more about the effects of coffee and caffeine on diabetes, speak with your health care practitioner.